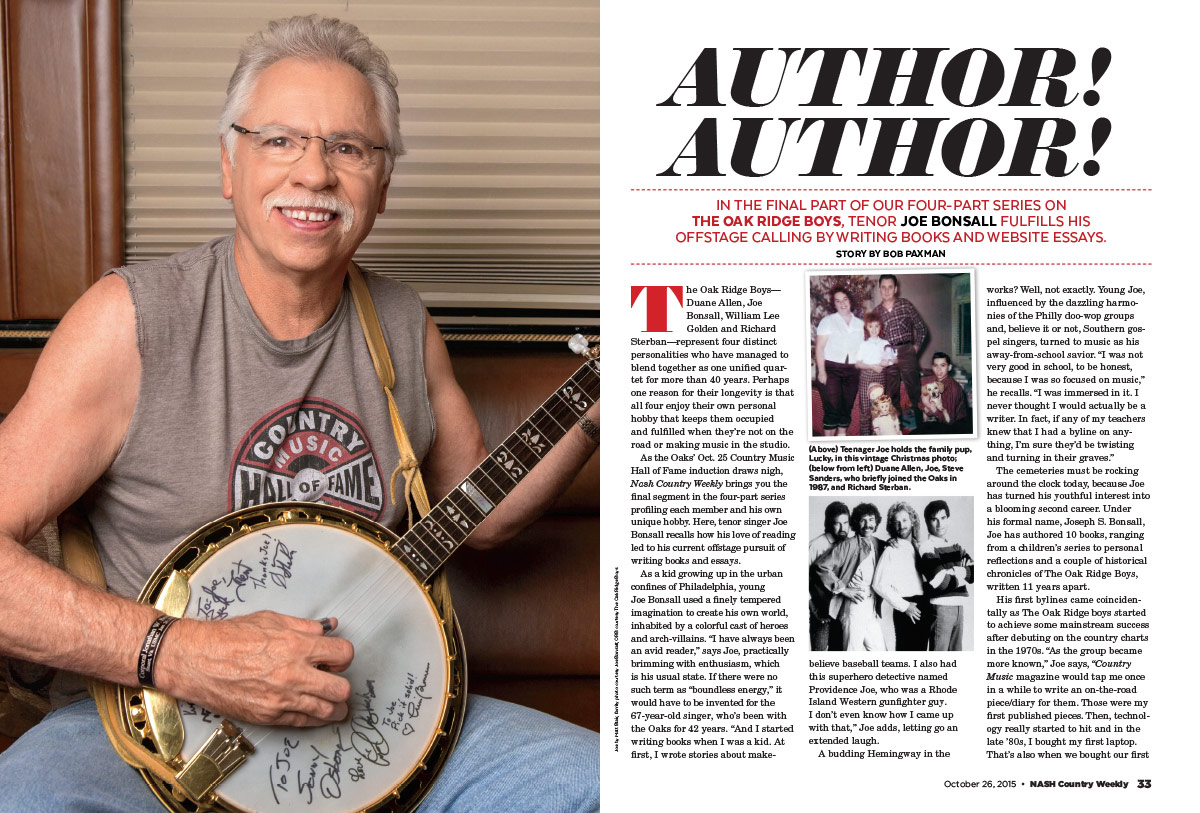 Originally published in the October 26, 2015 issue of Country Weekly magazine.

In THE FINAL PART of our four-part series on The Oak Ridge Boys, tenor Joe Bonsall fulfills his offstage calling by writing books and website essays.

The Oak Ridge Boys—Duane Allen, Joe Bonsall, William Lee Golden and Richard Sterban—represent four distinct personalities who have managed to blend together as one unified quartet for more than 40 years. Perhaps one reason for their longevity is that all four enjoy their own personal hobby that keeps them occupied and fulfilled when they’re not on the road or making music in the studio.

As the Oaks’ Oct. 25 Country Music Hall of Fame induction draws nigh, Nash Country Weekly brings you the final segment in the four-part series profiling each member and his own unique hobby. Here, tenor singer Joe Bonsall recalls how his love of reading led to his current offstage pursuit of writing books and essays.

As a kid growing up in the urban confines of Philadelphia, young Joe Bonsall used a finely tempered imagination to create his own world, inhabited by a colorful cast of heroes and arch-villains. “I have always been an avid reader,” says Joe, practically brimming with enthusiasm, which is his usual state. If there were no such term as “boundless energy,” it would have to be invented for the 67-year-old singer, who’s been with the Oaks for 42 years. “And I started writing books when I was a kid. At first, I wrote stories about make-believe baseball teams. I also had this superhero detective named Providence Joe, who was a Rhode Island Western gunfighter guy. I don’t even know how I came up with that,” Joe adds, letting go an extended laugh.

A budding Hemingway in the works? Well, not exactly. Young Joe, influenced by the dazzling harmonies of the Philly doo-wop groups and, believe it or not, Southern gospel singers, turned to music as his away-from-school savior. “I was not very good in school, to be honest, because I was so focused on music,” he recalls. “I was immersed in it. I never thought I would actually be a writer. In fact, if any of my teachers knew that I had a byline on anything, I’m sure they’d be twisting and turning in their graves.”

The cemeteries must be rocking around the clock today, because Joe has turned his youthful interest into a blooming second career. Under his formal name, Joseph S. Bonsall, Joe has authored 10 books, ranging from a children’s series to personal reflections and a couple of historical chronicles of The Oak Ridge Boys, written 11 years apart.

His first bylines came coincidentally as The Oak Ridge boys started to achieve some mainstream success after debuting on the country charts in the 1970s. “As the group became more known,” Joe says, “Country Music magazine would tap me once in a while to write an on-the-road piece/diary for them. Those were my first published pieces. Then, technology really started to hit and in the late ’80s, I bought my first laptop. That’s also when we bought our first cat, Molly. I loved that cat,” he adds with a toothy laugh.

Joe made that cat into a star. He ended up writing a series of four popular books, sadly now out of print, based on Molly the Cat. And as famous felines go, perhaps only Garfield can claim a more lucrative audience share. “They really were a big deal,” Joe says. “Those books helped me connect with children again. We would go on the road and schools would contact us wanting me to talk to one of their classes. That first Molly book really started me on the road to writing.”

His work of greatest impact is easily the loving tribute to his parents G.I. Joe & Lillie: Remembering a Life of Love and Loyalty. The book, published in 2003, is based on a song that Joe wrote about his mom and dad, who both served in World War II. “That has probably been my most popular book,” Joe says. “I did my research and I wanted to write it from a third-person standpoint. If you look at the book closely, you’ll see that it’s dedicated to all four of The Oak Ridge Boys’ mothers. That’s how important they are to us.”

This past year, Joe released his latest in the catalog, On the Road With The Oak Ridge Boys: 40 Years of Untold Stories and Adventures. It’s basically what the title implies, a road history of the group dating back to their early days as a gospel group but focusing mainly on the act we know today. It’s his second book on the award-winning group, following on the heels of An American Journey: A Look Back Over 30 Years With The Oak Ridge Boys, published in 2004. That earlier memoir fairly well captured the Oaks’ history, warts and all.

“I chronicled a lot of things that
people didn’t expect to read in that book,” Joe smiles. “It talked about William Lee Golden leaving the group for a while [1987­–1996] and Steve Sanders, who replaced him. I thought it was a pretty good read. The new one is out now and it’s doing really well.”

You can check out more of Joe’s musings and writings on his personal website, josephbonsall.com. The site contains short essays on a variety of subjects, the American Legion and the famed Rotunda at the Country Music Hall of Fame and Museum among them. Appropriately, Joe includes a piece on the Oaks’ election to the Country Music Hall of Fame, which takes place Oct. 25. “It is the biggest thing to ever happen to The Oak Ridge Boys,” he writes.

Joe seconds that as he chats with NCW at The Oak Ridge Boys’ office just outside of Nashville. “It’s just phenomenal to me that The Oak Ridge Boys are going to be in the Hall of Fame,” he says, leaning forward for emphasis. “It feels like all the hard work and the years of traveling we put in have been rewarded. We could not be more blessed.” NCW

Read more of the 2015 four-part series on the members of The Oak Ridge Boys as they prepared to enter the Country Music Hall of Fame on October 25, 2015.