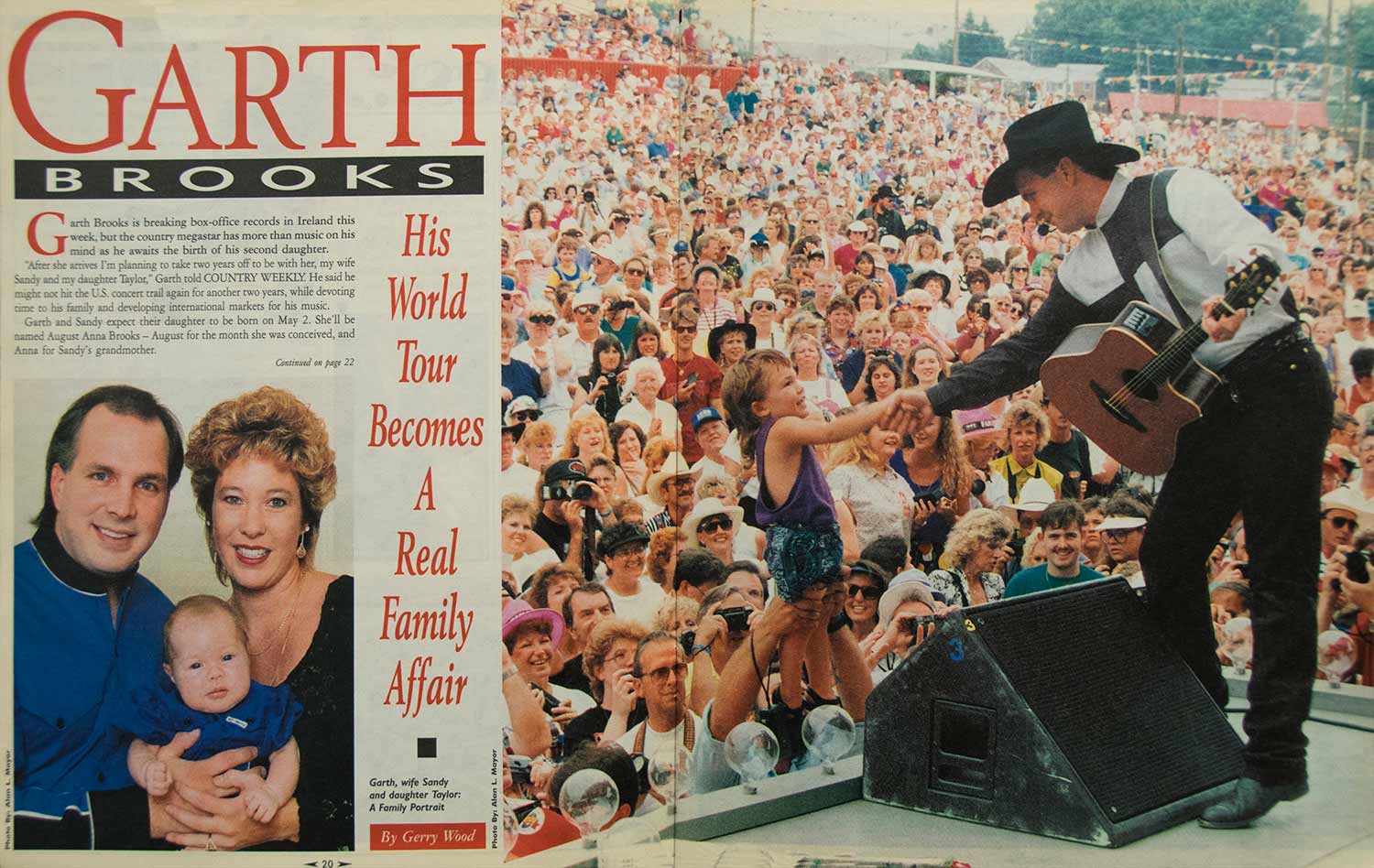 Garth Brooks is breaking box office records in Ireland this week, but the country megastar has more than music on his mind as he awaits the birth of his second daughter.

“After she arrives I’m planning to take a huge chunk of time off to be with her and my wife Sandy and daughter Taylor,” Garth told COUNTRY WEEKLY. He said he might not hit the U.S. concert trail again for another two years, while devoting part of that time to his family and the other part to the family of nations as he plans to develop international markets for his music.

Garth and Sandy are looking for an ETA of May 2 for a girl, to be named August, for the month she was conceived and Anna for Sandy’s grandmother. 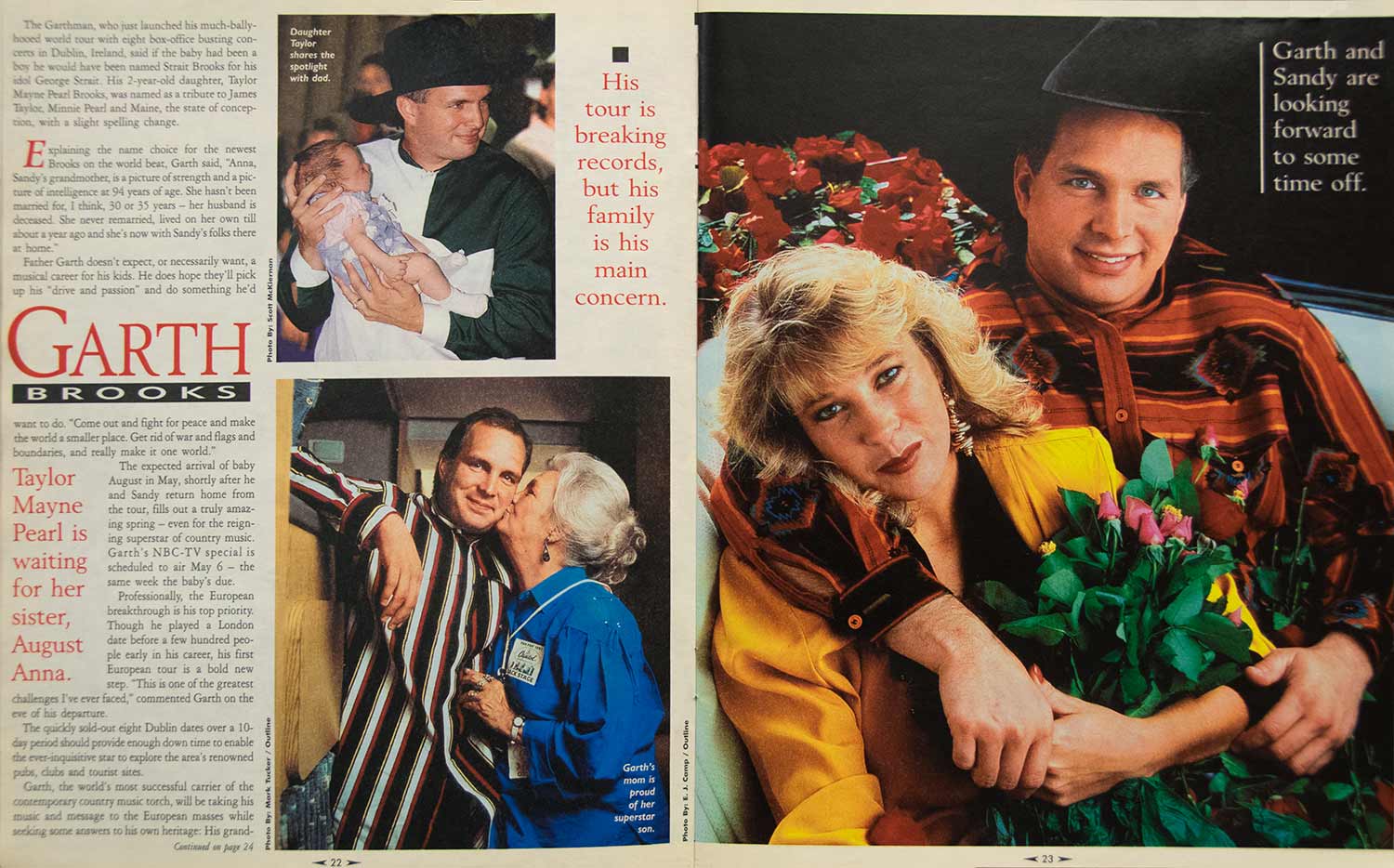 The Garthman, who just launched his much-ballyhooed world tour with eight box-office busting concerts in Dublin, Ireland, had the name Strait, for his idol George Strait, waiting in the wings had the baby been a boy. Daughter Taylor Mayne Pearl, now 2, was named as a tribute to James Taylor, Minnie Pearl and Maine, the state of conception.

Explaining the name choice for the newest Brooks on the world beat, Garth said, “Anna is Sandy’s grandmother, which I take as my own grandmother who is a picture of strength and a picture of intelligence at 94 years of age. She hasn’t been married for, I think, 30 or 35 years — her husband is deceased. She never remarried, lived on her own till about a year ago and she’s now with Sandy’s folks there at home.”

Father Garth doesn’t expect, or necessarily want, a musical career for his kids. He does hope they’ll pick up his “drive and passion” and do something he’d want to do. “Come out and fight for peace and to make the world a smaller place. Get rid of war and flags and boundaries, and really make it one world.”

The expected arrival of August in May — shortly after he and Sandy return home from the tour — fills out a truly amazing spring — even for the reigning superstar of country music. The same week the baby’s due, Garth’s NBC-TV special is scheduled to air May 6 and he’s expected to have shattered attendance records at stadiums and arenas all over Europe.

Professionally, the European breakthrough is the top priority. Though he played a London date before just a few hundred people early on in his career, his first European tour is a bold new step. “This is one of the greatest challenges I’ve ever faced,” commented Garth on the eve of his departure.

The quickly sold-out eight Dublin dates over a 10-day period should provide enough down time to enable the ever-inquisitive star to explore the area’s renowned pubs, clubs and tourist sites.

Garth, the world’s most successful carrier of the contemporary country music torch, will be taking his music and message to the European masses while seeking some answers to his own heritage: His mother Colleen’s father, a man named McElroy, hailed from Ireland. 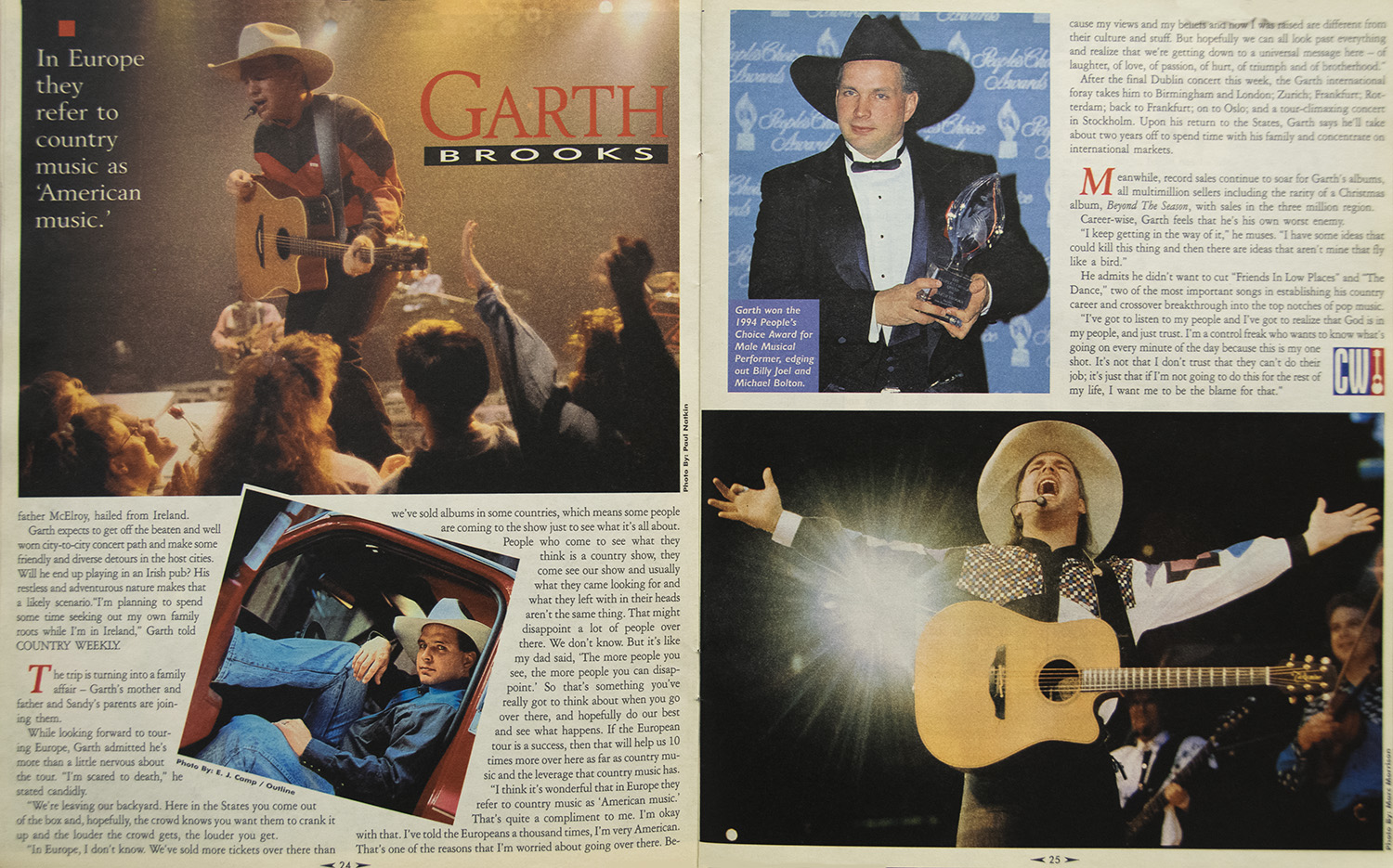 Garth expects to get off the beaten and well worn city-to-city concert path and make some friendly and diverse detours in the host cities. Will he end up playing in an Irish pub? His restless and adventurous nature makes that a likely scenario.“I’m planning to spend some time seeking out my own family roots while I’m in Ireland,” Garth told COUNTRY WEEKLY.

The trip is turning into a family affair — Garth’s mother and father and Sandy’s parents are all making the overseas jaunt.

While looking forward to touring Europe, Garth admitted he’s more than a little nervous about the tour. “I’m scared to death,” he stated candidly.

“We’re leaving our backyard. Here in the states you come out of the box and, hopefully, the crowd knows you want them to crank it up and the louder the crowd gets, the louder you get.

“In Europe, I don’t know. We’ve sold more tickets over there than we’ve sold albums in some countries, which means some people are coming to the show just to see what it’s all about. People who come to see what they think is a country show, they come see our show and usually what they came looking for and what they left with in their heads aren’t the same thing. That might disappoint a lot of people over there. We don’t know. But it’s like my dad said, `The more people you see, the more people you can disappoint.’ So that’s something you’ve really got to think about when you go over there, and hopefully do our best and to see what happens. If the European tour is a success, then that will help us 10 times more over here as far as country music and the leverage that country music has.

“I think it’s wonderful that in Europe they refer to country music as `American music.’ That’s quite a compliment, to me. I’m okay with that. I’ve told the Europeans a thousand times, I’m very American. That’s one of the reasons that I’m worried about going over there. Because my views and my beliefs and how I was raised are different from their cultures and stuff. But hopefully we can all look past everything and realize that we’re getting down to a universal message here — of laughter, of love, of passion, of hurt, of triumph and of brotherhood.”

After the final Dublin concert this week, the Garth international foray takes him to Birmingham and London; Zurich; Frankfurt; Rotterdam; back to Frankfurt; on to Oslo; and a tour-climaxing concert in Stockholm.

Meanwhile, record sales continue to soar for Garth’s albums, all multimillion sellers including the rarity of a Christmas album, *Beyond The Season*, with sales in the three million region.

Career-wise, Garth feels that he’s his own worst enemy.

“I keep getting in the way of it,” he muses. “I have some ideas that could kill this thing and then there are ideas that aren’t mine that fly like a bird.”

He admits he didn’t want to cut “Friends In Low Places” and “The Dance,” two of the most important songs in establishing his country career and crossover breakthrough into the top notches of pop music.

“I’ve got to listen to my people and I’ve got to realize that God is in my people, and just trust. I’m a control freak who wants to know what’s going on every minute of the day because this is my one shot. It’s not that I don’t trust that they can’t do their job, it’s just that if I’m not going to do this for the rest of my life, I want me to be the blame for that.”

And if his life’s tragically cut short, Garth knows exactly how he wants to go.

“You want to be with what you believe in and something you love doing when you die,” he advises. “If I did have to go, I’d like it to be with my children and wife in laughter, and realizing that this is the time it must be.”