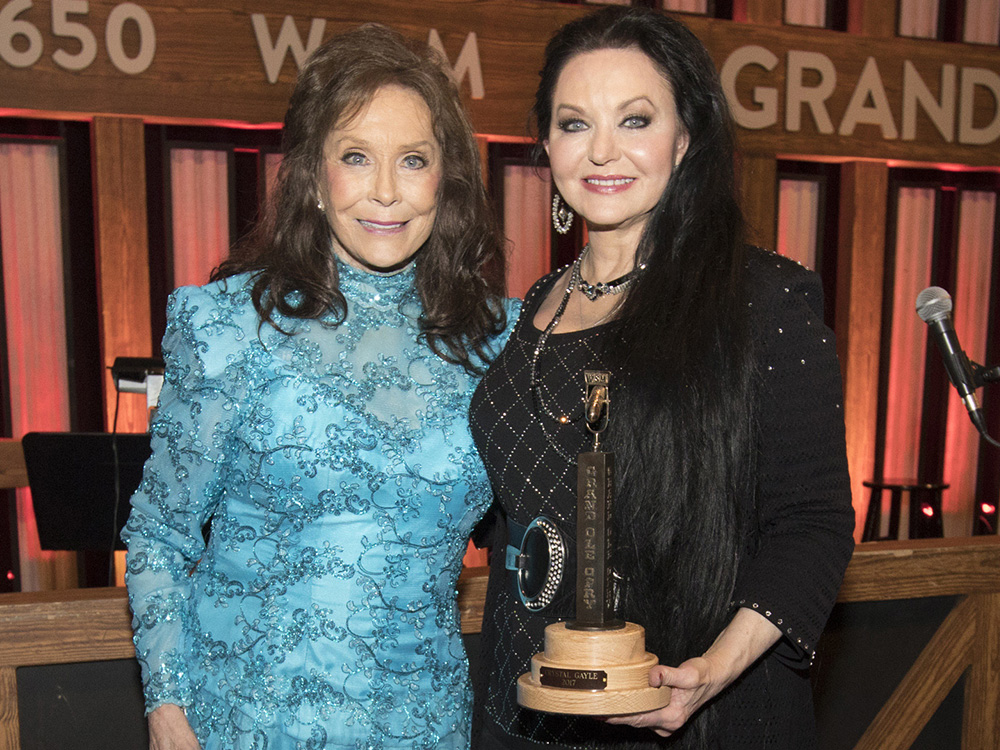 When Crystal Gayle made her debut performance on the Grand Ole Opry 50 years ago, she was a wide-eyed, nervous teenager. On Saturday night (Jan. 21), Crystal still felt a twinge of the nerves, but for an entirely different reason. She was about to become an official member of the Grand Ole Opry. And as Crystal joined the prestigious Opry family, her sister, country music icon Loretta Lynn, was on hand to perform the official induction. Loretta also gave the packed house at Nashville’s Ryman Auditorium an extra treat as she sang three of her classics during the ceremony.

Before her induction, Crystal met with members of the media to discuss her big night and share special memories of her career. “It’s been a long day but it’s been incredible,” she began, “I’m getting really nervous, too.” Crystal added that a case of the nerves is often a prelude to any performance that she gives. “But this is to a different degree,” she noted with a pleased grin.

Her knees were likely shaking that night in 1967 at the historic Ryman when Crystal first performed on the Opry. The 16-year-old was serving as a fill-in for Loretta, who had taken ill and was unable to perform. Crystal lovingly recalled that her mother made “a little shiny dress” for her to wear for the occasion. “I kept it all these years,” Crystal said. “I got to sing a song in Loretta’s place. I chose ‘Ribbon of Darkness,’ the old Marty Robbins song. I was very nervous, but I can still remember standing there on that stage.” Loretta joined Crystal and told the media members that she saw talent in her baby sister from a young age. “I knew it when she first started singing when she was about two years old,” Loretta said. “My daddy said she sounded like Molly O’Day. I have been proud of her ever since she has been on this earth, [and now] I’m so proud that she is getting to be a member of the Grand Ole Opry. Now we’re both members.”

Later in the evening, Loretta walked to the Ryman stage to roars of applause and performed three of her biggest hits: “Fist City,” “You’re Lookin’ At Country” and “You Ain’t Woman Enough.” As she handed Crystal her official Opry membership award, Loretta declared, “This is a special night for me.”

Crystal noted in return, “Being a member of the Grand Ole Opry is just incredible.” She also pointed to the side of the stage where that “little shiny dress” she wore on her Opry debut was displayed. Crystal delighted the house with a performance of her signature song, the CMA and Grammy-winning “Don’t It Make My Brown Eyes Blue.”

To fittingly close out the night, Crystal, Loretta and their sister Betty joined forces for Loretta’s classic “Coal Miner’s Daughter.” Everyone exited smiling.