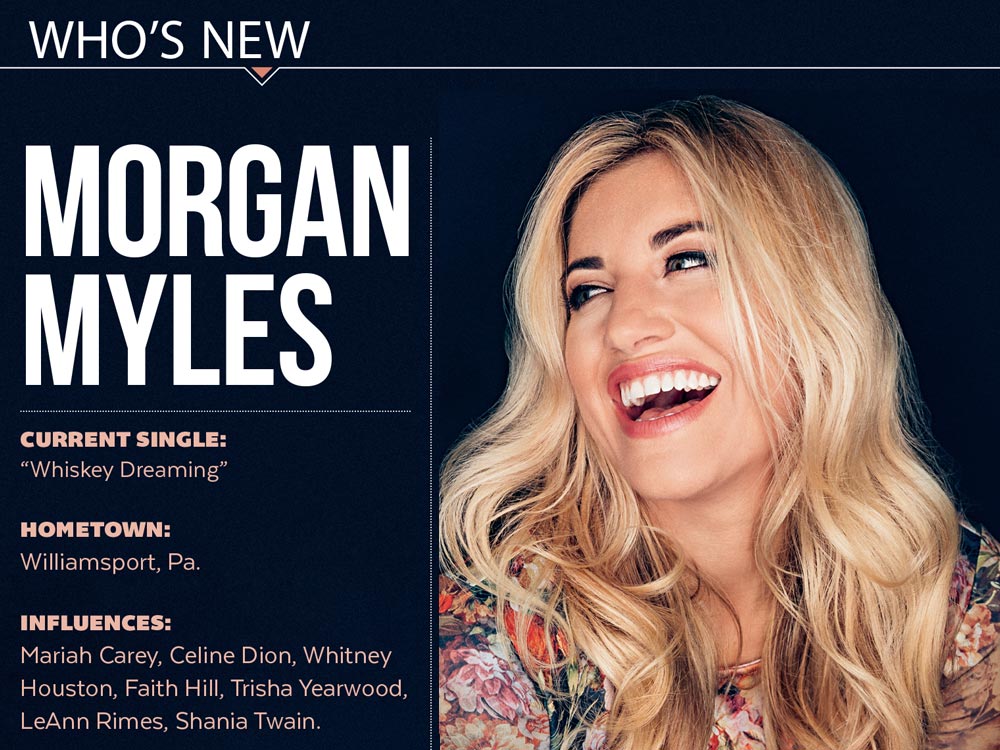 Originally published in the February 1, 2016 issue of Country Weekly magazine.

Why You Should Know Her:

Morgan fuses her love for country and soul music on her six-song EP, Miss Morgan Myles, which dropped on Jan. 8. After opening shows for Reba McEntire, Hank Williams Jr. and Rick Springfield, among others, the Pennsylvania native is ready to see her name on the marquee.

“The EP is called Miss Morgan Myles and the reason I called it that was because it’s very diverse. ‘Miss’ in front of a name in the South is a very Southern, feminine name. ‘Miss’ in front of a name in R&B/soul music is a diva—she’s a belter who can sing her butt off. Everybody was already calling me Miss Morgan Myles because of the alliteration. For the last eight years of my life in order to continue my dream, I’ve been called Miss Morgan because that’s what the kids call me who I nanny for. Miss Morgan Myles, I want it to be feminine and empowering. I’m all for strong women. It has a lot of diversity because women are diverse.”

“I had this melody for a while and started talking about what I was going through with a guy. It’s so stupid, it’s not even worth talking about, but that was the influence for ‘Whiskey Dreaming.’ We were slowly dating. He lived in Ohio but he would text me or call me every single day for a few months. Then I tore my ACL for the second time, so I had surgery, and he doesn’t call me until three days later at 3 o’clock in the morning. I was like, ‘No, no, no!’ If you’re hurting or health reasons, you just come. Otherwise, if they run, that’s a huge red flag for me. He obviously cared about me, but not enough to call, which is a problem. That was the reason behind the song. I was disappointed. If it’s 3 o’clock in the morning, he probably had a few. ‘Why are you up?’ It’s that dang whiskey!”

“I’ve been doing this since I was a little girl and I let the industry push me around. You’re being criticized and critiqued every single step of the way until you say, ‘No. This is who I am. This is how I was raised.’ You turn off the negativity. I’m not going to win over every single person in the world, and I had to learn that because I’m a pleaser. I had to shut the door on the negativity, so I shut the door to the world and that’s how I did this record. I’m a believer in positive energy. We should all be supportive of each other.”