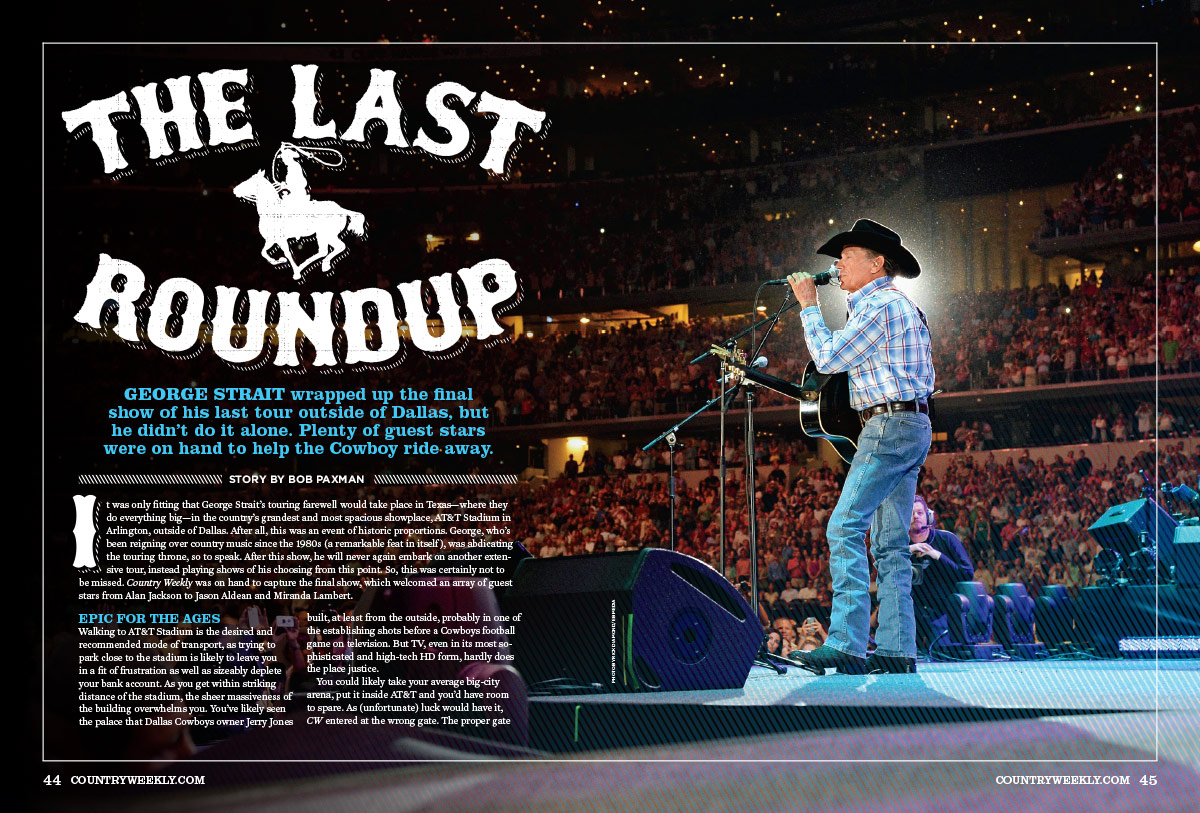 Originally published in the July 21, 2014 issue of Country Weekly magazine. It was only fitting that George Strait’s touring farewell would take place in Texas—where they do everything big—in the country’s grandest and most spacious showplace, AT&T Stadium in Arlington, outside of Dallas. After all, this was an event of historic proportions. George, who’s been reigning over country music since the 1980s (a remarkable feat in itself), was abdicating the touring throne, so to speak. After this show, he will never again embark on another extensive tour, instead playing shows of his choosing from this point. So, this was certainly not to be missed. Country Weekly was on hand to capture the final show, which welcomed an array of guest stars from Alan Jackson to Jason Aldean and Miranda Lambert.

Epic for the Ages

Walking to AT&T Stadium is the desired and recommended mode of transport, as trying to park close to the stadium is likely to leave you in a fit of frustration as well as sizeably deplete your bank account. As you get within striking distance of the stadium, the sheer massiveness of the building overwhelms you. You’ve likely seen the palace that Dallas Cowboys owner Jerry Jones built, at least from the outside, probably in one of the establishing shots before a Cowboys football game on television. But TV, even in its most sophisticated and high-tech HD form, hardly does the place justice.

You could likely take your average big-city arena, put it inside AT&T and you’d have room to spare. As (unfortunate) luck would have it, CW entered at the wrong gate. The proper gate was located “all the way around,” as one ticket-taker described in her best euphemistic manner, to the other side. By the time you make that trek, in considerably hot weather, you find that you have aged visibly.

The building seats more than 90,000 for football. But on this night, that number will be exceeded by a country mile.

Fans knew this day would eventually arrive, because George, ever the gentlemanly cowboy, had prepared us for it a couple years ago. Back in 2012, he announced that he would tour in 2013, take a few months off, then resume the tour in 2014. Once that tour was done, so was George, at least as far as heavy touring. At a press conference in Nashville in 2012, George told the gathered media at the Country Music Hall of Fame and Museum that he would not tour anymore after the 2014 series of shows. He would do the occasional show, if one struck his interest, and continue to make records.

The 2014 extended goodbye extravaganza was billed under the unwieldy name, The Cowboy Rides Away Tour Presented by Quicken Loans. The tour kicked off in January and played Nashville in March. Now the finale had arrived. This was truly the last roundup.

Early arrivals received a bonus treat: an hourlong set by Western swing purveyors Asleep at the Wheel, one of George’s favorite acts. Bandleader Ray Benson and cohorts whipped through “Hot Rod Lincoln,” “Boogie Back to Texas,” “House of Blue Lights” and others, effectively getting the crowd into the proper festive mood.

As the 7:30 show time approached, Gretchen Wilson’s “Here for the Party” filled the arena, bells gonged (is AC/DC on the bill?) and George’s band walked to the stage, one by one. Over the loudspeaker came the announcement that we were all part of a record-setting night. A crowd of 104,793 jammed AT&T Stadium, breaking the mark for an indoor North American concert previously set by The Rolling Stones in 1981. Already, history was being made and George hadn’t even come onstage yet. 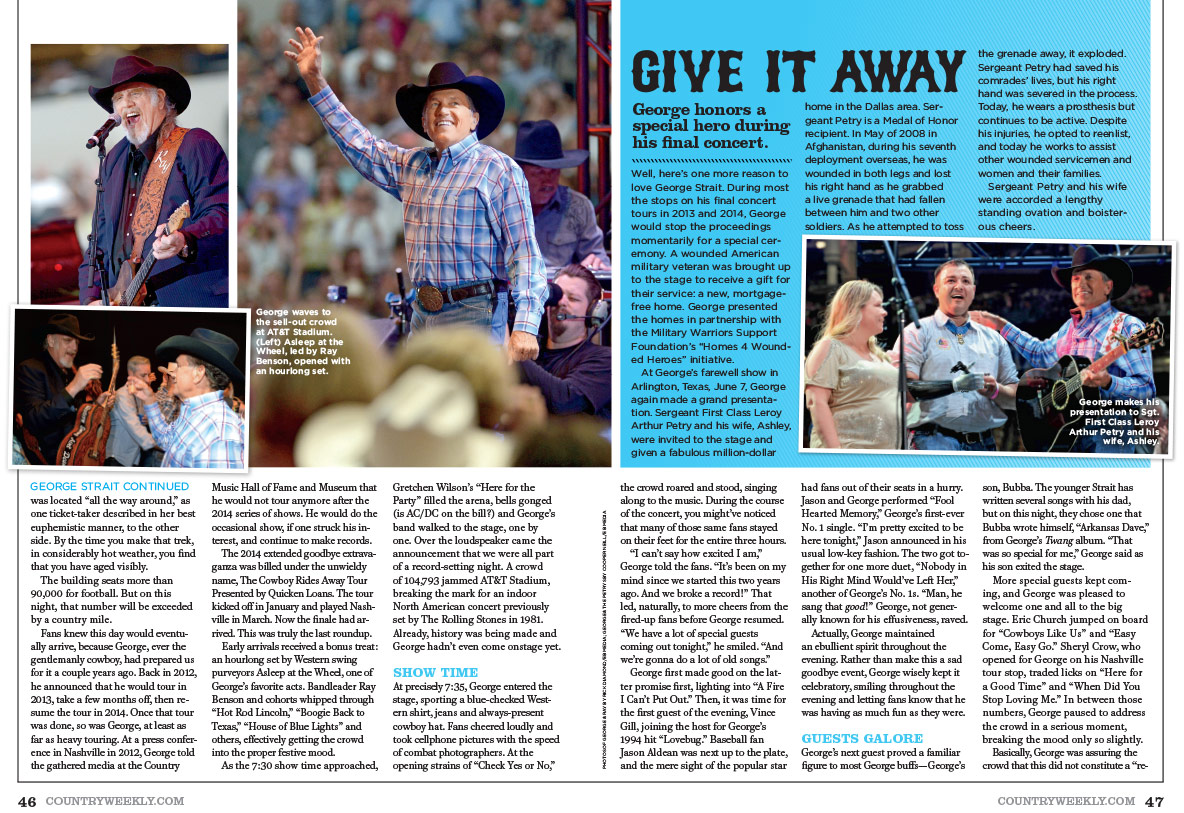 At precisely 7:35, George entered the stage, sporting a blue-checked Western shirt, jeans and always-present cowboy hat. Fans cheered loudly and took cellphone pictures with the speed of combat photographers. At the opening strains of “Check Yes or No,” the crowd roared and stood, singing along to the music. During the course of the concert, you might’ve noticed that many of those same fans stayed on their feet for the entire three hours.

“I can’t say how excited I am,” George told the fans. “It’s been on my mind since we started this two years ago. And we broke a record!” That led, naturally, to more cheers from the fired-up fans before George resumed. “We have a lot of special guests coming out tonight,” he smiled. “And we’re gonna do a lot of old songs.”

George first made good on the latter promise first, lighting into “A Fire I Can’t Put Out.” Then, it was time for the first guest of the evening, Vince Gill, joining the host for George’s 1994 hit “Lovebug.” Baseball fan Jason Aldean was next up to the plate, and the mere sight of the popular star had fans out of their seats in a hurry. Jason and George performed “Fool Hearted Memory,” George’s first-ever No. 1 single. “I’m pretty excited to be here tonight,” Jason announced in his usual low-key fashion. The two got together for one more duet, “Nobody in His Right Mind Would’ve Left Her,” another of George’s No. 1s. “Man, he sang that good!” George, not generally known for his effusiveness, raved.

George’s next guest proved a familiar figure to most George buffs—George’s son, Bubba. The younger Strait has written several songs with his dad, but on this night, they chose one that Bubba wrote himself, “Arkansas Dave,” from George’s Twang album. “That was so special for me,” George said as his son exited the stage.

More special guests kept coming, and George was pleased to welcome one and all to the big stage. Eric Church jumped on board for “Cowboys Like Us” and “Easy Come, Easy Go.” Sheryl Crow, who opened for George on his Nashville tour stop, traded licks on “Here for a Good Time” and “When Did You Stop Loving Me.” In between those numbers, George paused to address the crowd in a serious moment, breaking the mood only so slightly.

Basically, George was assuring the crowd that this did not constitute a “retirement” party. “I’m still going to do a few things here and there,” he said. He added that more records were on the way, which seemed to sit very well with the crowd. And just to confirm, George last year signed an agreement with his record label for at least five more albums in the coming years.

During the middle portion of the show, George made sure to pepper his set with classic favorites, including “I Can Still Make Cheyenne,” “I Saw God Today,” “Marina del Rey” and others. Changing things up a bit, Martina McBride entered and joined George on a couple of iconic songs made famous by other duet teams: the Johnny Cash/June Carter hit “Jackson,” and “Golden Ring,” a No. 1
single for George Jones and Tammy Wynette. Faith Hill and George combined forces on “A Showman’s Life,” which Faith has previously recorded, and “Let’s Fall to Pieces Together.” An emotional moment came shortly after that when George sang “I Believe,” inspired by the school shootings in Newtown, Conn., in 2012. George appeared to be on the verge of tears as he managed to make his way through the anthemic number.

Perhaps the loudest cheers of the night came with the arrival of Alan Jackson. The sight of these two legends on the same stage together was certainly one for the archives, and fans seized the moment as they took photos, sent Twitter utterances and delivered Facebook messages. Even inside a building named for a large communications giant, cell lines were jammed and the Wi-Fi was on overload.

George introduced Alan’s set by saying, “Yes, I started doing this in the ’70s,” leading up to the opening bars of “Amarillo by Morning,” with George and Alan trading leads and harmonies. The two followed that with their award-winning 2000 duet, “Murder on Music Row,” a scathing look at the contemporary country sounds of the era that still resonates nearly 15 years later.

Miranda Lambert was all smiles as she and George performed “How ’Bout Those Cowgirls” and “Run.” George then introed “another really, really old song,” the romantic favorite “You Look So Good in Love.” 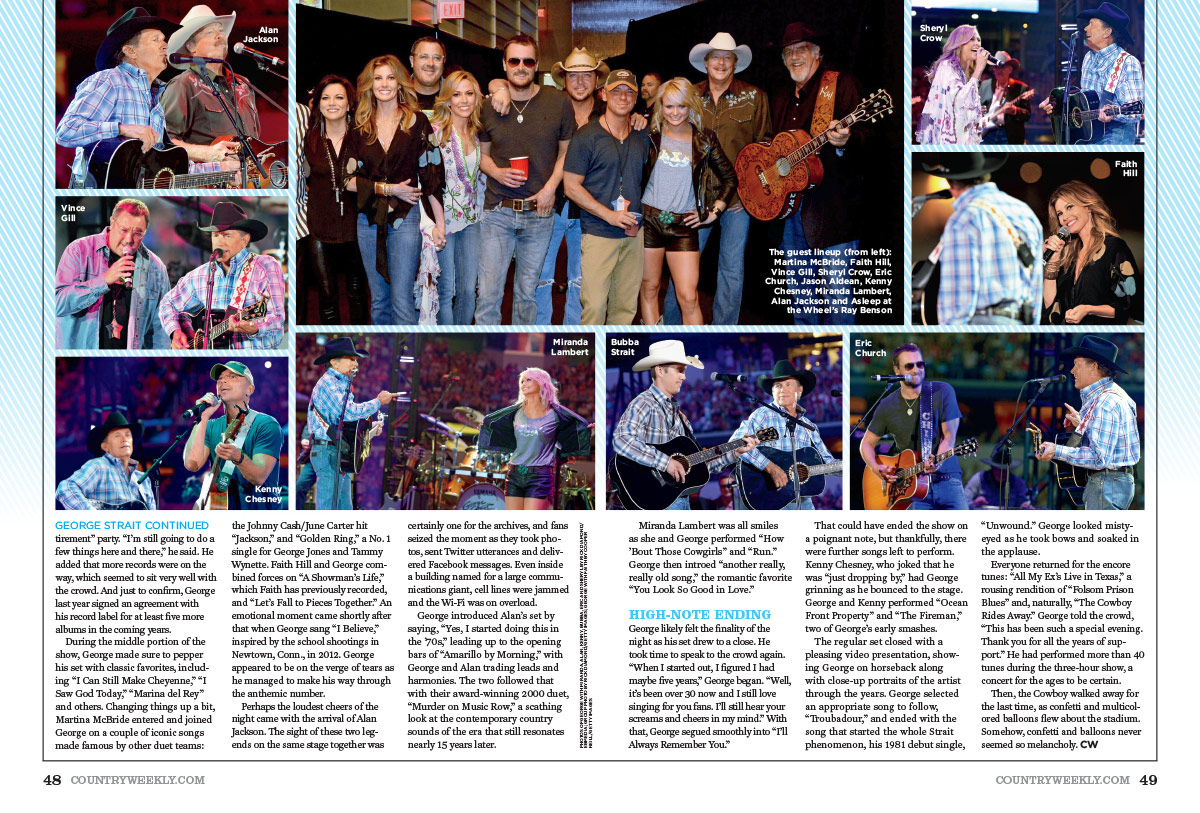 George likely felt the finality of the night as his set drew to a close. He took time to speak to the crowd again. “When I started out, I figured I had maybe five years,” George began. “Well, it’s been over 30 now and I still love singing for you fans. I’ll still hear your screams and cheers in my mind.” With that, George segued smoothly into “I’ll Always Remember You.”

That could have ended the show on a poignant note, but thankfully, there were further songs left to perform. Kenny Chesney, who joked that he was “just dropping by,” had George grinning as he bounced to the stage. George and Kenny performed “Ocean Front Property” and “The Fireman,” two of George’s early smashes.

The regular set closed with a pleasing video presentation, showing George on horseback along with close-up portraits of the artist through the years. George selected an appropriate song to follow, “Troubadour,” and ended with the song that started the whole Strait phenomenon, his 1981 debut single, “Unwound.” George looked misty-eyed as he took bows and soaked in the applause.

Everyone returned for the encore tunes: “All My Ex’s Live in Texas,” a rousing rendition of “Folsom Prison Blues” and, naturally, “The Cowboy Rides Away.” George told the crowd, “This has been such a special evening. Thank you for all the years of support.” He had performed more than 40 tunes during the three-hour show, a concert for the ages to be certain.

Then, the Cowboy walked away for the last time, as confetti and multicolored balloons flew about the stadium. Somehow, confetti and balloons never seemed so melancholy. CW